A bio-weapon is taking the world by storm

Update 3/20 8:32am PST – If you had previously downloaded the audio antidotes, please do so again. They have been revised to be more effective. The previous version is still good though. The playlist below is already updated with the revised versions

NOTE: This is experimental! Use at your own risk, though audio/music is generally recognized as safe by most people. The following audio files can be used to strengthen the body’s natural defense mechanisms.

If you’re symptomatic, listen at least twice a day, and please use headphones if at all possible (more bass response the better) at a low-medium volume. Over the ear headphones are preferable to earbuds.

You may download a “.zip” file containing ALL the tracks below for offline listening:

Download Audio Antidotes
DISCLAIMER: The information provided by this website is for educational purposes only. The statements on this website have not been evaluated by the Food and Drug Administration. The products and services found within are not intended to diagnose, treat, cure or prevent diseases. Nothing on this website is intended to diagnose, treat or cure any physical or medical conditions. If you have a physical or medical condition, you should seek the advice of your medical professional immediately.

I don’t believe we’re seeing honest reporting on this Coronavirus issue, especially from China, but also from the US.

In my research I have found that the genome (DNA) sequences of the Coronavirus is man-made and of laboratory origin. I can say this 100% certainty for the reasons below. Whether it’s a biological weapon, or a vaccine experiment gone wrong I cannot say for sure, but there is no doubt it was created, or at least modified, by man. According to scientist James Lyons-Weiler PhD, founder of the Institute for Pure and Applied Knowledge, there are pShuttle-SN vectors all over the genome. pShuttle vectors are tools used in CRISPR technology that leave artifacts from splicing genes into genomes, and these vectors do not ever occur naturally. Source 1

There was a study done at Kusuma School of Biological Sciences, Indian Institute of Technology that shows that there are genes in the 2019-nCoV that were spliced in from the HIV virus. Source 2

In Jan 2018, the “Institute of Military Medicine Nanjing Command” submitted the DNA of an envelope protein of a “Bat SARS-like coronavirus”. Source 3

The above two proteins are 100% identical, which implies that the Chinese Military were in possession of the virus back in 2018, and what they were in possession of back then is the exact same thing as what is going around now… This fuels the theory that this is a biological weapon. The evidence of 2019-nCoV being of laboratory origins is open source and irrefutable, yet the media says nothing about what the scientists are shouting from the rooftops.

Furthermore, one of the world’s foremost experts on biological weapons, Francis Boyle, the author of the Biological Weapons Anti-Terrorism Act of 1989 (that was approved unanimously by both Houses of the U.S. Congress and signed into law by President George H.W. Bush), has stated based on his research that the 2019-nCoV is nothing other than a biological weapon. Source 5

In Wuhan, the center of the outbreak there is China’s only BSL-4 bio-containment laboratory. BSL-4 is the standard for the highest security bio-labs in the world, and they are where the world’s most deadly pathogens are studied. In 2017, Nature magazine published an article in which scientists voiced concern over pathogens escaping. Quote from Nature: “Tim Trevan, the founder of CHROME Biosafety and Biosecurity Consulting in Damascus, Maryland, says that an open culture is important to keeping BSL-4 labs safe, and he questions how easy this will be in China, where society emphasizes hierarchy”.

The lab in Wuhan is less than 300 meters from the Wuhan seafood market, where the outbreak is reported to have started.

My research has also found that the virility of the virus is extreme. Based on a recent study published 2/7/2020: For each person infected, they can be expected to infect 6.6 new people. Source 7. This variable is referred to as the R0 factor. Previous studies estimated the R0 factor to be between 2.5 and 4.0.

Recently infected people may not see symptoms for up to 24 days, yet for most of that time they are contagious and spreading the virus unaware. The combination of the R0 factor and the long incubation period is a recipe for disaster, essentially making it impossible to contain.

Some other stats taken from published medical studies: Of those exposed to the virus, 83% will get infected. Of those infected, roughly half require hospitalization. Of those receiving top-notch medical care, 15% die. Source 8. There is an average of 2.7 hospital beds per 1000 people in any given city. If you extrapolate the previous numbers out, you quickly see that there is no way that the medical system can keep up with what is coming. The end result being: Of those that require hospitalization, that are unable to get it, the fatality rate is reported to increase to 43 – 65%.

China has completely locked down more than 70 cities, containing more than 700 million people (more than twice the population of the entire USA). The impact of that is already devastating their economy. Logically, it just doesn’t make sense to harm your economy that way for relatively few dead people. As of 2/18/20 China reports approximately 1800 deaths.

A company outside of China leaked over a week ago that they received an order for 1 million body bags from the Chinese government. The government has also ordered factories in China to shift from making their normal products to making millions of body bags. Source 10

As of last night, video footage leaked from China of a drone going door to door in Wuhan telling people that there will be no more allowance to send anyone out to buy groceries. Source 11. They cannot leave their homes at all, for any reason.

And the media here in the US is reporting that the flu is a more serious concern, and that the flu has already killed 12,000 people this year. Yet there are 11 Coronavirus quarantine camps already set up in the US, which is something that has never been done for the flu… Source 12. If flu is a greater concern, why are the Coronavirus quarantine camps being established?

The US military has also received orders to prepare for a pandemic. Source 13. Once again, applying a bit of logic, you will understand that the government would not spend the money to mobilize and prepare the military to do this unless they know something – something we are not being told…

Two weeks ago, a CDC director, Dr Nancy Messonnier, responded via text message to a family friend inquiring about the Coronavirus. The conversation has since leaked. In the conversation the director admits that there is more than 1000 cases in the US, and they’re keeping it quiet to not create a panic. She warned her friend to wear a mask whenever they are traveling, even short distances. When the leaked conversation got out, those that attempted to confirm the conversation via social media where blocked by Dr Nancy Messonnier. See screenshots below… 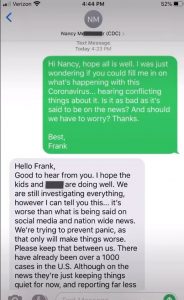 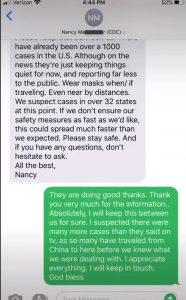 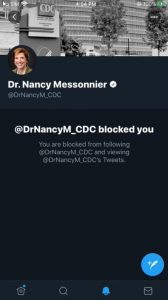 The same Dr Messonnier has since announced in a press conference that masks are not necessary to wear in public, and that only sick people need them to prevent others from getting infected. Essentially stating to the public, the exact opposite of what she’s telling her personal friends. Source 14. Personally, I don’t believe a thing she says anymore.

There are reports individuals from all over the US that hospital workers and emergency responders are under gag orders preventing them from disclosing any information about Coronavirus cases. Source 15. Yet the information is getting out because of brave “average Joe’s” that care more about spreading the truth than the threat of jail time…

Just like in China, the US government’s actions are speaking much louder than their words…

The Epoch Times reported 2/18/20 that there are 712 being monitored for the virus in WA State. These people are NOT being tested, despite being deemed important enough to be monitored. Source 16

I say all this to say: I am personally growing increasingly cautious of unnecessarily being in public places. My concerns are not based on fear, but rather on thorough research, logic and concern for the lives of all – especially those I’m close to. What we’re being told just doesn’t add up…

I urge all readers to become more self-reliant. We cannot assume that if an outbreak occurs in our communities that we will be able to be treated at a hospital. Even if we are able to get a bed in a hospital, the fact that the US gets 97% of its anti-microbial pharmaceuticals from China (which has shut down exports) is a serious problem. Source 17

The severity of the problem is one side of the equation, but on the other side scientists and doctors around the world are finding ways to prevent and treat the condition (regardless of the fact that the media says there is no cure and that everyone needs to wait for a vaccine). I would be happy to share about the solutions I am aware of if you would like to know more…

Structured Water: The Single Most Important Element for Your Health

Aluminum, Fluoride, Glyphosate and EMF: The Deliberate Concoction to Shut You Down

Sorry, the comment form is closed at this time.